If you’ve ever flown into Nice airport before, you might have already noticed the large white buildings in a wave like shape on the coast. This is Villeneuve-Loubet; or part of it more like.

The town is split into two with the beach and village about a 10 minute drive from each other. They seem like worlds apart – the glamorous yachts on the coastline and the picturesque village further inland. Both are worth a visit and, provided you make use of the public transport, can be seen together to make a great day out.

The beach is very easy to get to, with Villeneuve-Loubet train station a short walk from the marina and just minutes off the A8 motorway. ‘Marina Baie des Anges’ is the port where you can find dozens of yachts, small cafés, bars and an impressive wave-shaped apartment block which is an iconic landmark on the coastline. There are many places to grab a bite to eat but I headed into the ‘Supermarché Marina Baie des Anges’ to pick up a pizza slice, packet of crisps and bottle of water which I ate whilst watching the sun set – perfect! Apart from relaxing on the beach and taking a short walk around the port, there isn’t a great deal else to do here which is why I would suggest making the journey to Villeneuve-Loubet village to see what else the area has to offer.

When I visited the village for the first time, I had to question whether it was the same place as the beach. The brightly coloured houses (look out for the police station for the most beautifully coloured building!) and the small cobbled streets are a complete contrast to the seafront which I think just adds to appeal of visiting Villeneuve-Loubet – in the words of Hannah Montana, it really is the ‘best of both worlds’. I wouldn’t particularly choose to walk from the beach to the village  (a 4.1km hike over a few largish hills) so luckily there is a bus which takes you between the two places for just €1.50. It’s the Envibus #23 and getting off at ‘Place de Gaulle’ will drop you to the centre of the village. Once you’re at the village, there is no shortage of things to see and do:

Every Wednesday and Saturday morning from 8am-1pm, there is a market outside of the ‘Hôtel de Ville’ with clothes, cheeses and meats all on offer. It was very small and so I wouldn’t recommend visiting especially for the market but it did bring a little buzz to the area on a mid December morning. There is also a market by the sea every Monday morning but I didn’t visit to be able to comment on it.

Now I have been to A LOT of museums during my stay in France but I can honestly say that some of my favourites were in Villeneuve-Loubet. I don’t know if it was because of the interesting exhibits on show or the friendly welcome but I think that the museums are one of the villages massive selling points.

‘Musée Escoffier de l’Art Culinaire’ holds quite a lot of sentimental memories for me as it was the first place I visited with my au pair family when I arrived in France. I landed at around 10am on a Sunday morning and by 2pm, we were out and off to visit this museum. It is located in the birth-home of ‘Auguste Escoffier’ – a French chef who created the peach melba. I had no idea who he was before I entered, but after a guided group tour, I was fully clued up on his life, the history of cooking and old menus and kitchen tools. There was even a room filled with chocolate sculptures – you can imagine how good that smelt!! The €6 entry fee (with reductions for students, the elderly and those aged under 11) includes a peach m’elba and coffee so it is worth the money! Bare in mind though that the museum closes between 5th November-21st December and, in summer months, it is closed for lunch between 1pm-2pm (this is the case for most places in France – lunchtime is a big deal!)

‘Musée d’Histoire et d’Art’ is located in the centre of the village and contains exhibits relating to previous wars. It is split over three levels; the first being a temporary exhibition which changes every few months, the second being a permanent display of information from the World Wars and the third level being based on the ‘Algerian War’ and ‘Gulf War’. When I visited, I was so excited to see that the temporary exhibition was based on the First World War in memory of 100 years since it ended. I’m not normally a history fan but there’s something about the World Wars which really interests me and I think it’s important that these memories are kept alive. I actually went to the remembrance service at Villeneuve Loubet on 11th November and it was clear that the war strongly affected the community (it was also an experience to see how the French celebrate remembrance day as they don’t use poppies or have a 2 minute silence but, instead, they released balloons and doves) The temporary exhibition showed the names of Villeneuvois soldiers who died in the war and the locations of their death as well as photos, documents and objects belonging to soldiers from the area. The second and third floor were equally as interesting and there was sooo much on show! I could have spent hours looking through everything as it was packed full of small objects and photos and genuinely really caught my interest. Although everything is written in French, you could easily visit and enjoy what’s on offer without needing to read anything at all and the fact that admission is free makes it even more of place to visit!

The third and final museum I found in Villeneuve-Loubet was called ‘Maïoun dei Granouïe’ – it is not advertised as much as the other two but do not let this deter you. It is small and run by two elderly members of the village and I may even go as far as saying that it was my favourite museum I had visited on the Côte d’Azur (considering I had been to over 50 whilst in France, that is a BIG statement) I think what made it was the warm welcome I had by the elderly couple who owned the place. They gave me a guided tour and went into detail about every single item on show. They only spoke French but I found his accent in particular very clear and easy to understand even though I am not yet fluent in French (I’m working on it!) There is a section dedicated to agriculture where you can find a ‘cigale’ (an insect native to the area), a cocoon of a butterfly which is the emblem of Villeneuve-Loubet and the history of farming in the village (the area is known for growing tobacco, carrots and the flower ‘la rose du mai’ which is used in Chanel No5) Honestly, I could go on for ages talking about what I learnt, all thanks to the thoroughly detailed and passionate descriptions from the owner and his wife. Other sections include a scene of a local school with workbooks dated back to 1920, a kitchen showing items used in the olden days and another section based on the World Wars and stories of what surviving Villeneuvois soldiers did when they returned from war. The tour was so informative and, before we knew it, 2 hours had passed (plus another hour after that which we spent discussing our families, accents, au pair work and, dare I say it… Brexit) It was the warm welcome I recieved which made this museum really stand out from the rest and I am so glad I decided to visit this place despite the disregard it has in tourist brochures. I found it slightly difficult to find but it is located behind the ‘Petit Casino’ shop and it’s also worth noting that admission is free!!

OTHER THINGS TO SEE

The village of Villeneuve-Loubet is very picturesque and quaint and there are many small cobbled alleys away from the main centre which are great for wandering around and taking in the sights. It is quite a climb but at the top of the village is ‘Église St Marc’ – a church overlooking the village. There isn’t really much to do there but it’s just a small point of interest in the village. ‘Chapelle Notre Dame d’Espérance’ is located not far from here and the views beyond the graveyard are amazing. Also in close proximity is ‘Forteresse Médiévale’ which is a medieval castle; it is only open for a guided tour and dates can be requested at the tourist office. After exploring the sights in the higher part of the village, walk back down the hill and buy yourself a treat in the boulangerie ‘La Gourmandine’. The sweet treats on offer look incredible and I couldn’t resist buying a strawberry tart for the journey home.

Although soaking up the glitz and glamour of the Villeneuve-Loubet coastline is deffo worth doing, I hope I’ve shown that there is plenty more to do beyond this once you get to the village. I felt there was a real community spirit here and it was so interesting to get a deeper insight into the history and lives of the locals – a place I would certainly recommend!

This site uses Akismet to reduce spam. Learn how your comment data is processed. 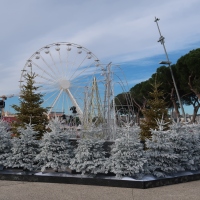